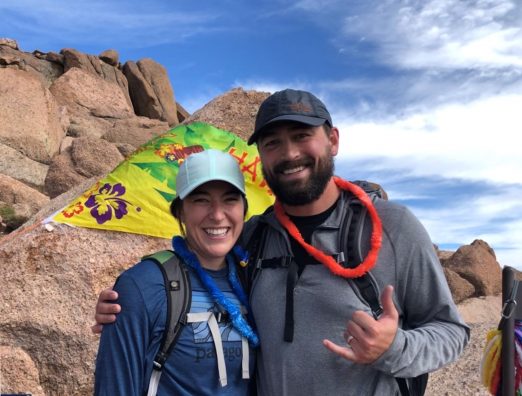 All pledges will be collected automatically until September 11, 2021.

Hard to believe that this is going to be my 5th year completing the Pikes Peak Challenge! My family does this as way to remember my older brother Jesse and make positive impact on the world.

Jesse was the life of the party and always knew how to make people feel confident and special. I went to so many of his games when I was a kid and I always wanted to be as good of an athlete as my older brothers Matt and Jesse. When Jesse had a series against Air Force when he was playing for Dana college I would stand behind him in the outfield so that I could learn to play like him. I feel like I always played my best when Jesse was at my games and I loved when he was in the stands watching me play. Jesse was the guy I would call when I was afraid I was going to get in trouble with my parents for a speeding ticket, or participating in events that I should not have been under the age of 21, or when I was having a particularly difficult time transitioning from Trinidad State Junior College to Regis University. Jesse died by suicide in 2009. I remember waking up in the middle of the night and knowing that there was something terribly wrong and the following morning knowing that my life was never going to be the same. When I heard that Jesse had died, I immediately wanted to call Jess, he would make everything better. Who do you call when your go to person is no longer around?

In a lot of ways the real challenge of the Pikes Peak Challenge is explaining my connection to the event and sharing my story. In a way it’s become therapeutic because it allows me an outlet to discuss my brother who I still miss and grieve. It’s not a topic that is easily brought up in conversation, “Hey I’m feeling kind of down today because I’m thinking about my brother that passed away.” Talking about Jesse with family is even more difficult because you know they feel that pain just as acutely. Even 12 years later I can feel like it’s 2009 all over again. Abby can attest to the fact that I cry during almost every episode of A Million Little Things, I used to think I was good at hiding it but I know she’s caught me when she grabs my hand reassuringly. Each year I do this I feel more confident sharing my story.

Jesse died by suicide and I will never truly understand what led him down that path. We know that he did experience head injuries during his baseball career, at a time when it was considered cool to stay in a game after being knocked unconscious by a fastball. Head injuries in many cases can be an invisible injury, externally a person can appear fine, while they internally they are not themselves. Is repeated brain injury the reason Jesse made that choice, that’s impossible to answer, but could it have been a contributing factor, absolutely.

I don’t have control over my brother dying, but I do have control over my response to his death. I choose to live every day and try to make people smile and be confident and know that someone cares about them. I choose adventure over stress and I choose to support organizations like the Brain Injury Alliance of Colorado because of all the amazing work that they do to help survivors of brain injury.

You can support me during this event anyway you choose whether it is well wishes, joining team Jesse, reading more about the Brain Injury Alliance or making a donation through my campaign page. Make sure to send some positive vibes towards Pikes Peak as Team Jesse hikes to the summit on September 11, 2021 to help raise funds for The Brain Injury Alliance of Colorado.

Truly, thank you for taking the time to read my story!