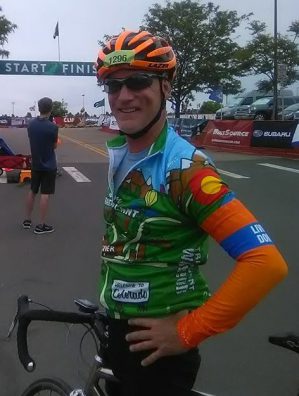 All pledges will be collected automatically until September 8, 2018.

I am a proud husband of 15 years and an equally proud father of three boys, Luke, 13; Joshua; 11; and Samuel, 8. This will be my fifth ascent of Pikes Peak, my third for the Challenge. I first climbed it in 1999 when I moved to Colorado, and I had an aborted attempt in 2004 when a friend I was with said he couldn’t go any further, and so we turned around and survived the more than 13-mile hike. Not only am I a survivor of a severe TBI (1993 cycling accident; 4-day coma; GCS of 5; 37 days of PTA), I am also a kidney donor, having participated in the life-saving transplant in June 2017, when Jim Eastman, also a survivor of TBI, received my left kidney.

Professionally, I am a licensed psychologist specializing in the evaluation and treatment of individuals with traumatic brain injury. I also facilitate BIAC support groups for people with brain injury in Ft. Collins, Johnstown/Loveland, and Longmont. Since 1994, I have worked in a number of capacities in the field of brain injury, from peer mentor, job coach, and independent life skills trainer, to vocational rehabilitation specialist, case manager, program coordinator, licensed therapist, and newsletter editor.

By some estimates, more than 10 million individuals sustain a traumatic brain injury each year.  Figures usually noted say the number is much lower, closer to 1.7 million.  For anyone who has sustained a TBI, the reality is that numbers don’t matter and life is different post-injury.

That was especially true for me almost 25 years ago, when I was hit from behind by a food-delivery truck while cycling along a deserted highway in Louisiana.  While four days in a coma miraculously did not render me cognitively impaired, it altered my worldview and I became convinced that living for God was so much more rewarding than living for self.  As devastating as my brain injury was, I was determined not to let it become my identity, and over the years, as I became a husband and a father then a graduate student and clinical psychologist, who I am as a person became more important than what I did occupationally.  Maybe that’s why my résumé reads like a smorgasbord of disability positions (peer mentor, job coach, ILST, case manager, program director, support group facilitator, psychology adjunct professor, newsletter editor).

For me peyo9rsonally, while my life changed dramatically, it didn’t become defined by that singular event.  Sure, I went back to school and trained to become a neuropsychologist, something that never would have transpired had I not sustained a TBI.  And yeah, I probably wouldn’t have donated a kidney to my friend and fellow TBI survivor Jim Eastman if I hadn’t survived that harrowing late September day when my Dura-Ace equipped Litespeed met pavement body first.

Still, I see that everything that has happened for a reason, that God has used “all things” for good, in my life and in the lives of others I have been privileged to work alongside as counselor, independent living specialist, kidney donor, psychologist.  As a friend.

And so I hike Pikes Peak for a fifth time (four and a half?) with thoughts of those who because of their injury cannot and with hopes that my story will somehow provide the hope and inspiration for others to persevere when every muscle and neuron within them screams that life isn’t worth living.  It is, I have learned and can testify, especially when “self” takes a backseat to the honor of serving others.