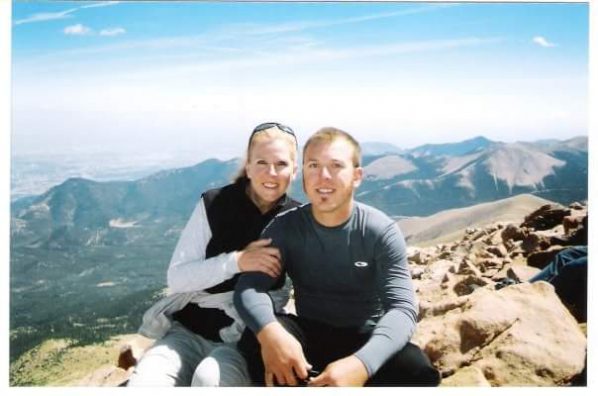 All pledges will be collected automatically until September 9, 2017.

Here we are again another year another challenge! Despite the spit shake and pinky swear we did on top of the last summit of Pikes Peak as A Noble Cause team in 2017- we were sure it was our last challenge as physically our aging bodies had taken quite a toll that year. But then, a friend reached out and asked us to consider the challenge yet again. At first we were adamant we could not, would not do it again. We are unprepared physically and have not conditioned in anyway in preparation for the always difficult challenge. Then, we remembered the very first hike we ever made for PPC in 2007. We were out of shape physically, had no idea the mental or emotional challenge the event would bring but the reward of the summit and the many relationships and interactions we made along the way...priceless!! We are once again asking for your kind donation of any amount supporting Traumatic Brain Injury Awareness - Many of you are already aware of our personal connection to this cause and have supported us on many of hikes drawing awareness to traumatic brain injury. Our hearts are in this difficult hike every year despite our physically ailing bodies that may tell us different. People who have suffered TBI are our hero's. They are survivors and they NEVER GIVE UP!! This is our team moto and our constant motivation as we have witnessed the struggles and realities of this injury first hand- thank you for always loving and supporting us through this amazing journey to help others and bring the much needed awareness for those afflicted with a traumatic brain injury. May God Bless each and everyone of you for your support! Steve and Cindy Noble Team: A Noble Cause #bestillmyheart #pikespeakchallenge #anoblecause #traumaticbraininjuryawareness #tbi #nevergiveup #summit #onemoretime #biac

Event: September 9, 2017
Colorado
Team: A Noble Cause
Share this campaign